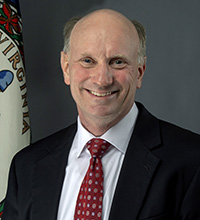 On January 15, 2022, Joseph Guthrie became the 18th Commissioner of the Virginia Department of Agriculture and Consumer Services. This appointment was originally announced by Governor-elect Glenn Youngkin on January 4.

Commissioner Guthrie is a sixth generation Virginia farmer. He owns and operates a beef cattle and hay farm in Pulaski County on farmland that has been in his family since 1795. Since 2007, he served as a Senior Instructor at Virginia Tech and taught courses in business management, finance, communications, and leadership in the Agricultural Technology Program.

Prior to his appointment, he served the residents of Pulaski County on the Board of Supervisors since 2015, and was elected Board Chair in 2020 and 2021. He was also elected to a four year term on the Pulaski County School Board in 2011. Commissioner Guthrie has served as the president of Virginia Tech’s College of Agriculture and Life Sciences Faculty Association, president of Pulaski County Farm Bureau, and president of the Virginia Cattlemen’s Association. He was appointed by USDA Secretary Tom Vilsack to the National Cattlemen’s Beef Promotion and Research Board and was appointed by former Governor Bob McDonnell to the Virginia Cattle Industry Board.

Commissioner Guthrie earned a B.S. degree in Agricultural Economics from Virginia Tech. He was named Virginia Tech’s Man of the Year as the outstanding graduating senior in 1989. He earned a master’s degree in 1991 in Agricultural Economics and International Trade from Massey University in New Zealand, where he studied as a Fulbright Scholar. In 2007, he was awarded the Eisenhower Fellowship in Agriculture to research international trade of beef from Australia and New Zealand.

The VDACS Commissioner provides executive leadership for the agency in implementing the Governor’s initiatives in economic development, agriculture, consumer services, and international and domestic marketing. The position promotes effective and efficient utilization of agency financial and human resources. The commissioner provides executive leadership and management for the agency Strategic Management Team and agency operations and programs to enhance effectiveness and efficiency in all agency programs and activities, including marketing, animal health, food safety, environmental stewardship, and consumer protection programs.

The Commissioner’s Office establishes the executive direction and philosophy for operation of the Virginia Department of Agriculture and Consumer Services in order to support the programs, initiatives, and direction of the Governor’s Office and Secretary of Agriculture and Forestry. The Commissioner's Office provides leadership in the planning, development and implementation of state agricultural and consumer policy initiatives and programs. The office ensures that program services are focused on meeting customer needs and effectively carried out within the limit of budgeted resources. In addition, the office supports the agency-wide strategic planning process to ensure that all programs are working toward achievement of common goals and objectives through the Strategic Management Team.

The office is comprised of the Commissioner; Deputy Commissioner; the offices of Policy, Planning, and Research, Administrative and Financial Services, Human Resources, Internal Audit, and Communications; and the Milk Commission.

Copyright © 2022, Virginia Department of Agriculture and Consumer Services.
For comments or questions concerning this website, contact the VDACS Webmaster. WAI Level A Compliant